The vineyards of Chateau Gazin cover an area of 26 ha in a single tract located on the upper terrace of the terroir of Pomerol. Chateau Gazin originated as an 18th century hamlet built by the...Read More

The vineyards of Chateau Gazin cover an area of 26 ha in a single tract located on the upper terrace of the terroir of Pomerol. Chateau Gazin originated as an 18th century hamlet built by the Knights of Saint-Jean for pilgrims on traveling to Santiago de Compostela. The wines of the estate are characteristically feminine and charming, due to the dominance of Merlot. Their lavish generosity offers a wide range red and black fruit aromas that harmonise with its intense purple or garnet colour, delivering dozens of nuanced aromas and a spicy nose.

Chateau Gazin | A Classic Pomerol Through and Through

Perched on a high terrace of the Pomerol plateau, Chateau Gazin is a family owned and operated estate producing sumptuous, seductive, silky-smooth wines that have become synonymous with the excellence of their appellation. It is indeed Pomerol’s remarkable terroir – distinguished by blue and green clays, rich in iron oxide – that allow Merlot to shine at its brightest, imbuing the wines of Chateau Gazin with complex aromas of jammy black fruit, licorice and mint, evolving truffles, undergrowth and well-worn, warm leather with age. 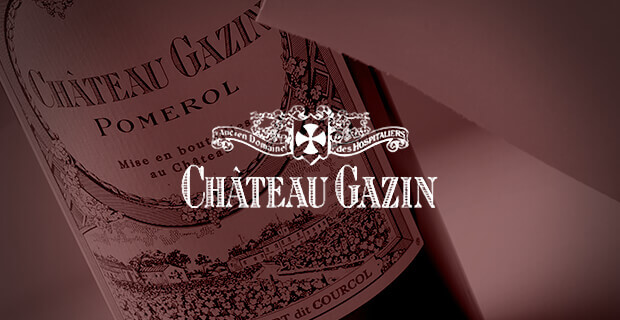 A Historical Chateau in Pomerol

The Chateau Gazin estate is located in Pomerol, a prestigious appellation on the Right Bank of Bordeaux, whose vineyards were developed between the 12th century and the Fresh Revolution, under the knights of Saint-Jean of Jerusalem, Malta and Rhodes. Back in the 18th century, the chateau was a hamlet, most likely situated on the site of the “Hospital of Pomeyrols,” which was built by the nights of the region to accommodate religious pilgrims on their way to Santiago de Compostela. This rich history served as the inspiration for the label of the estate’s second wine, named “L’Hospitalet de Gazin.”

Today, the Pomerol estate is owned by the 5th generation of the same family, represented by Laure (Madame Michel Dufour), Christophe, Inès and Nicolas de Bailliencourt. The Bailliencourt dit Courcol family is one of the oldest in northern France, descended from the high lords of Landas. Actually the “dit Courcol” part of their name dates back to 1214, when King Philippe-Auguste praised one of the members of the family for his performance at the Battle of Bouvines and called him “court col” or “short neck,” referring to his compact physical build. The motto of the Bailliencourt family became “fut par virtu Courcol” or “Courcol through virtue.” The great-grandfather of the Chateau Gazin’s current owners, Louis Soualle, purchased the estate in 1917. Since then, the family has done their utmost to confirm the estate’s reputation as one of the very best in Pomerol.

A Priveledged Terroir on the Pomerol Plateau

Situated in the eastern part of the famous Pomerol plateau, whose soils are rich in limestone and clay, the Chateau Gazin estate expands over a vineyard of 26 hectares all in one piece, adjoining the legendary vineyards of Petrus and Chateau L’Evangile. The vines of the estate are planted in Gunzian gravel soils with subsoils that include blue and green clays with iron oxides. These very special clays, called “smectites,” are ideal for retaining water, allowing for a regular supply to the vines. It is exactly this clay and gravel subsoil, so typical of the Pomerol terroir, which defines the style of Chateau Gazin.

The vineyard is planted with 90% Merlot, 7% Cabernet Sauvignon and 3% Cabernet Franc at a density of 5,500 to 7,000 vines per hectare. They are aged 35 years on average. The vineyards are managed by means of a reasoned agriculture that respects the environment, with works that include a ploughing the soil, using organic fertilizers instead of synthetic ones, a reasoned pest-control through sexual confusion hormones and a manual harvest of the fruit, carried out on a plot-by-plot basis.

Traditional Winemaking to Bring Out the Best

Following a primary sorting by the harvesters out in the vineyards, the fruit is sorted two additional times before and after the fruit is separated from the stalks. This helps ensure that only grapes of the highest quality make it into the final blends of the estate. The alcoholic fermentations are carried out by grape varietal and by plot in small concrete vats before the juice is left to macerate with the skins for a period of two to three weeks. The free-run juice is then drained and the marcs are pressed, their pressed wines kept separately. Then, malolactic fermentation is carried out in either barrels or vats, depending on the nature and needs of each batch (determined by the grape variety and characteristics of the plot).

At Chateau Gazin, the wines are matured for a period of 18 months in French oak barrels of which 50% are new. The wines are racked once every three months, on average. Contact with the lees and oak allows the wine to develop a powerful structure and complexity that will last them through the decades, allowing each vintage to age and evolve in the bottle over the years to come.

Besides the estate’s First Wine, Chateau Gazin also produces a second Pomerol AOP wine named L’Hospitalet de Gazin. This cuvee was created in 1986 and is made with as much meticulous care as its older brother.

Throughout the course of the past century, the wines of Chateau Gazin have become known around the world for their elegant, seductive character brought about by Merlot, which makes up a great majority of the blend. In fact, the estate’s First Wine is made as a pure, single-varietal Merlot in certain vintages, including 2012 and 2013. In their youth, these wines are intense crimson in color, turning more garnet with age. On the nose, juicy, jammy red and black fruits (notably, plum) mingle with complex notes of coffee, licorice, chocolate, almond, toast and mint, evolving over years aged in bottle a spicy bouquet of truffles, undergrowth, leather and game.

Drinkable after only a few years in bottle, these wines will age remarkably well over the course of fifteen to twenty years or even more.