The white Corton Grand Cru is a very rare wine. Indeed more than 100 hectares of Corton are planted with Pinot Noir and are allowed to bear the Grand Cru designation, while only one hectare is...Read More

The white Corton Grand Cru is a very rare wine. Indeed more than 100 hectares of Corton are planted with Pinot Noir and are allowed to bear the Grand Cru designation, while only one hectare is planted with Chardonnay. This wine shows aromas which are very representative of the great wines of Burgundy such as cinnamon, white flowers, nut, amber, pepper. It is a powerful wine when young and becomes very delicate and elegant with age. 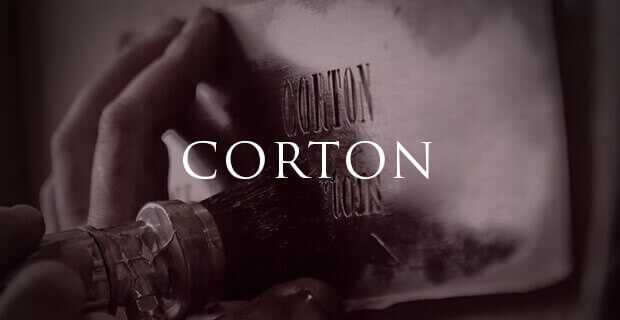 In the northern tip of the Cote de Beaune, on the south-facing side of the Hill of Corton, sage vines of Chardonnay and Pinot Noir stretch their roots deep into some of Burgundy’s most precious soils. The gently sloping vineyards of the Corton Grand Cru appellation are arranged in a natural amphitheatre, allowing the vines – long-time spectators of this magnificent terroir – to enjoy optimal exposure to the sun, and bear fully ripened fruit in time for harvest. The wines of Corton GC are some of the most sought-after in the world: fruit-forward whites whose hints of fig and baked pear blend with a flinty minerality, and endlessly elegant reds whose red fruit and violets evolve leather, animal and damp earth with age.

The Very Long History of the Corton Appellation

While Corton was officially granted Grand Cru on July 31st of 1937, its history dates back much further. The Hill of Corton was already being used for wine production back in the 8th century. It was one of the favourite regions of Emperor Charlemagne, who played a very significant part in the history of French winemaking. It is believed that he was the first to order white vines to be planted on the western side of the Hill of Corton, now occupied by the Grand Cru appellation Corton-Charlemagne.

It was in fact Emperor Charlemagne who gave his name to the flagship white variety of Burgundy, which has since become the most planted white grape in the world: Chardonnay. As legend has it, he preferred Chardonnay wines because they would not stain his beard. While Corton does produce some white wines, the Grand Cru appellation of Corton-Charlemagne is more reputed for its world-class Chardonnay. It is no wonder the appellation adopted the name of the Chardonnay-loving emperor.

From the Middle Ages onwards, the vineyards of Corton were cultivated by the local monasteries, until the French Revolution, during which they were confiscated and sold to private owners. Now this land is owned by individual wine producers, like Domaine de la Vougeraie, Meo-Camuzet, Domaine Jacques Prieur and Joseph Drouhin.

A Beautiful Terroir Spread Across the Hill of Corton

Spread due east to due west on the southern slopes of the Hill of Corton in the Cote de Beaune, the Corton Grand Cru appellation is the largest of all grands crus in Burgundy. This vineyard covers 360 acres of land amidst a cluster of villages famous for wine-growing: Aloxe-Corton, Pernand-Vergelesses, Ladoix-Serrigny and Savigny-lès-Beaune. The vineyards of the Corton Grand Cru are planted at altitudes between 250 and 330 meters with both Pinot Noir and Chardonnay vines. In fact, Corton is one of only two Grand Cru areas in Burgundy to produce both red and white wine (the other being Musigny). This variety of plantings reflects the diversity of terroirs within the Corton appellation.

The Hill of Corton itself is a rather large outcrop of limestone, topped with a dense woodland called the Bois de Corton. The slopes of the Corton Grand Cru, in the Cote de Beaune, are shaped like a vast amphitheater and characterised by exceptional growing conditions. On the western side of the Corton appellation, the topsoil is thinner and the limestone core is closer to the surface. This kind of terroir is perfectly suited for the production of white wine, such as the flinty Chardonnay of Les Vergennes. Meanwhile, the eastern side of the appellation features soils richer in marlstone, which is better suited to Pinot Noir cultivation. Here, the vines also receive more sun exposure in the morning.

As a way to really give credit where credit is due (i.e.: the magnificent micro-terroir of each Corton climat), the mention of Corton on a Grand Cru bottle is usually followed by the name of the specific climat that gave rise to it. The Corton Grand Cru is home to 25 different climats and lieux-dits, including Les Meix, Les Moutottes and Les Perrieres.

The Wines of Corton

The Burgundy white wines of the Corton appellation are grown mainly in the climats of Vergennes and Languettes and they have a potential of guard ranging between 4-10 years. These pure Chardonnay wines, from producers like Chandon de Briailles, display a pale gold colour with green reflections in the glass. On the nose, these wines offer easily recognizable, fresh and flinty mineral aromas, which blend in with hints of beeswax, yellow flowers, baked apple, bracken, and cinnamon. On the palate, these wines are beautifully well-rounded, revealing touches of custard on the entry and a certain nutty finish, depending on the vintage. White Corton tends to go beautifully with goat cheese, shellfish or fish, and poultry in a creamy sauce.

Corton red wine tends to show an intense crimson colour in the glass, transforming gradually into magenta with age. Although - as in the case of the whites - their aromas and flavours vary by climat, these 100% Pinot Noir wines offer generous fruit notes (kirsch cherry, gooseberry, blueberry) and floral fragrances (violet) on the nose, developing earthy touches of underbrush, animal fur, warm leather, liquorice and pepper with age. Wines like the Corton Grand Cru “Clos des Cortons Faively” Monopole by Domaine Faiveley also offer hints of orange peel and sage on the bouquet. On the palate, these wines have remarkable structure and power, with a certain frankness to balance the generosity. Wines like the Corton Grand Cru “Les Renardes” by Domaine Parent, for example, also offer a satisfying iodine finish. Corton Grand Cru wines should be aged at least 4 to 12 years to fully express themselves. The red wines of Corton practically demand to be paired with food, going beautifully with strong, soft-centred cheeses and highly flavourful meat dishes, like roast, grilled or braised beef or poultry in sauce.