The identity of Beychevelle is based on a legend. At the beginning of the 17th century, the Chateau became the property of the First Duke of Epernon. He was so powerful that ships sailing the Gironde...Read More

The identity of Beychevelle is based on a legend. At the beginning of the 17th century, the Chateau became the property of the First Duke of Epernon. He was so powerful that ships sailing the Gironde had to lower their sails up until the castle as a sign of respect and allegiance to the Duke. It was during this time that the domaine acquired its emblem, a griffon-bowed ship with its Gascon-derived named “Baisse voile” that would later become Beychevelle.

A superb property with beautiful gardens, Chateau Beychevelle produces one of the prestigious wines from the Saint-Julien appellation, which is located on the Left Bank of the Bordeaux region. More radiant than ever, the estate’s new vat house designed by architect Arnaud Boulain is at the forefront of innovation.

The uniqueness of Beychevelle’s terroir is due to its magnificent Garonne gravel outcrops and its prime location in the immediate vicinity of the Gironde, which helps regulate and protect against the climate.

Château Beychevelle | A Luminous North Star of the Médoc

Gazing out over the banks of the Garonne River in the south-eastern tip of Saint-Julien, Château Beychevelle glitters brightly, a precious jewel in the crown of the Médoc wine region. At first glance, this magnificent Classified Growth stands out for the stunning classic architecture of its Château, surrounded by perfectly manicured gardens and grounds. 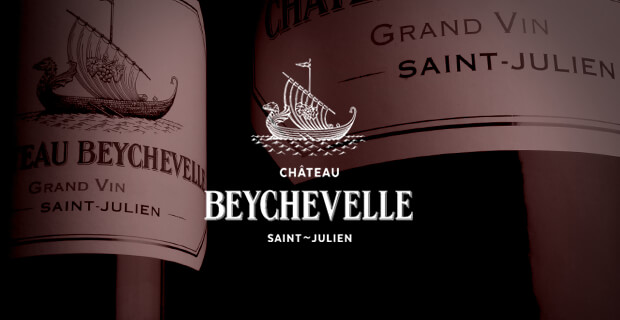 Its illustrious history and one-of-a-kind aesthetic are steeped in the theme of tall ships and adventures at sea, the inspiration behind the design for the Château’s state-of-the-art new winery and the boat with the griffon-shaped prow that graces the label of each bottle of Château Beychevelle wine. From 220 acres of carefully guarded vineyards comes a wine with such elegance and poise, a rich and smooth texture on the palate and a quite, supple, understated power.

The Illustrious Past of Château Beychevelle

Throughout the centuries of its history, Château Beychevelle in Bordeaux’s Saint Julien appellation has been ruled by a noble line of influential men and women, who have brought glory and their own signature touches to the estate. The construction of the iconic Château was commissioned by Bishop Francois of Foix-Candale in 1565.

At the beginning of the 17th century, the estate became the property of the first Duke of Epernon Jean-Louis Nogaret de la Valette, a great French navy admiral, mignon of King Henri III and Governor of Guyenne. During his reign, all boats passing the estate on the Garonne would have to lower their sails as a sign of respect for and allegiance to the duke – hence the Gascon name “Bêcha vela” or “baisse voile” in French, meaning “lower sail,” which became “Beychevelle” over time. The emblem of the Château also echoes this noble past through a ship with a griffon-shaped prow, which is featured on every bottle of Château Beychevelle wine.

The second Duke of Epernon also contributed to the rich history of Château Beychevelle by inviting a troupe of actors to perform and stay at the Château, including the young artist Jean-Baptiste Poquelin (better known as Molière). In 1757, the estate was acquired by the Marquis de Brassier, who renovated and rebuilt the estate, constructing the Beychevelle port. During the reign of Bordeaux wine merchant and Saint Julien mayor Pierre-Francois Guestier, Château Beychevelle was classified as a Fourth Growth in the 1855 Classification of the Médoc wines commissioned by Napoleon III.

In 1875, the estate was purchased by Armand Heine, who extended the Château by constructing its north wing. The Heine family was responsible for replanting the vineyard following the phylloxera epidemic, which devastated the wine regions of France at the end of the 19th century.

Together, Monsieur and Madame Heine beautified the Château, decorating its gates and adding immaculately landscaped sculpture gardens and a conservatory of tropical plants and exotic birds, all connected through a series of picturesque walkways. It was during this time that the Château earned its reputation as the “Versailles of the Médoc,” a reputation it still proudly holds today. The Château remains deeply involved in the arts, welcoming artists from around the world to hold exhibitions and concerts in the estate’s magnificent setting.

The Château stayed the property of the Heine family for several generations before being acquired by Aymar Achille-Fould in 1970. Today, Château Beychevelle belongs to Grands Millésimes de France, part of the groups Castel and Suntory.

Rooted in Garonne Gravel | The Vineyards of Château Beychevelle

Château Beychevelle is a Fourth Classified Growth of 1855 situated in the Saint-Julien appellation of the Médoc region, on the Left Bank of the Bordeaux region of France. Today, the Château Beychevelle estate spans 250 hectares (620 acres), of which around 90 hectares (220 acres) are dedicated to vines. The rest of the property is covered with pine forests and grasslands used to graze Limousin cattle. The Garonne River, in close proximity to the vineyard, creates a unique microclimate by moderating the temperature, protecting the vines from the harsh winter temperature and searing summer heat.

The vines of Château Beychevelle are aged 30 years on average and planted on two plateaus, stretching their substantial root systems deep into Garonne gravel soils from the Gunzian era upon a clay-gravel subsoil. These emblematic Médocain gravel soils are famous for their excellent water drainage and for capturing the warmth of the sun during the day in order to keep the vine roots warm at night. This created the ideal conditions for the cultivation of Cabernet Sauvignon, which represents 52% of the Beychevelle vineyard, along with 40% Merlot, 5% Cabernet Franc and 3% Petit Verdot.

The team has eliminated herbicides, minimized the use of pesticides and today practices organic farming on roughly one third of the vineyard. Château Beychevelle has also earned the ISO 14001 certification for its sustainable approach to viticulture.

During a very selective manual harvest, carried out separately for each grape variety, vine age group and terroir, the fruit is sorted three times. The brand-new Château Beychevelle winery, designed by architect Arnaud Boulain, was inspired by the history of Beychevelle and the nautical theme of grand voyages by sailboat. This work of art combines aesthetic with function and is outfitted with the latest technology. The winery has been designed for a strict plot-by-plot vinification, allowing each microterroir to be fully expressed. The new facilities also allow for a gentle gravity transfer of the fruit throughout the facility, along with a very precise control of temperature and extraction.

Following a traditional vinification, Château Beychevelle is aged for a period of 18 months in French oak barrels, of which 50% new oak. The estate’s sought-after second wine Amiral de Beychevelle, made from younger vines, is aged for 12 months in French oak, of which 30% is new. Both wines are fined with egg whites and racked by candlelight, as dictated by Médoc tradition. The wines are bottled in the spring.

Château Beychevelle also produces a wine named Les Brulières de Beychevelle from 12 hectares of vines in the Haut-Médoc appellation. This wine blends just Cabernet Sauvignon and Merlot, and is vinified in a separate winery but with the same care and attention as the estate’s First and Second Wines.

In many ways the magnificent Château Beychevelle estate, with its stunning architecture and glorious gardens, stands as an accurate representation of the property’s wines. The words “purity,” “elegance,” “concentration” and “richesse” come to mind when describing these wines. While the specific style of the estate’s first wine depends largely on the character of each vintage, Château Beychevelle is best known for its smooth, rich texture on the palate and its understated power.

The 2019 vintage, for example, is revealing fresh fruit and a tannic structure with gorgeous elegance and depth. The excellent 2015 vintage offers on the nose a core of rich dark cherry, cassis and plum preserves, elevated by nuanced aromas of smoked meat, garrigue, leather and earth. These wines will pair beautifully with classic meat dishes, like stewed oxtail or bavette steak with roasted potatoes. More delicate vintages will also pair beautifully with heartier seafood dishes, like grilled tuna or swordfish.