The chateau Miraval is situated in Provence region, in the heart of the Var in the commune of Correns (the first entirely organic village in France). Covering 600 hectares the grounds are...Read More

The chateau Miraval is situated in Provence region, in the heart of the Var in the commune of Correns (the first entirely organic village in France). Covering 600 hectares the grounds are scattered with vines, woods and olive groves. Purchased in 2008 by famous Hollywood couple Brad Pitt and Angelina Jolie the property benefits from clay-chalk soils with vines partially planted on terraces at an average altitude of 350 metres. This allows the chateau to produce, under the appellation of Côtes de Provence, dry whites and fruity rosés. Ethereal with a remarkable freshness their most famous cuvée Pink Floyd was created in homage to the psychedelic British rock group of the same name. The vinification is trusted to the Perrin family, owners of Château de Beaucastel in renowned Châteauneuf-du-Pape.

The story of Miraval stands out as a perfect fusion of American celebrity with French savoir-faire. Still co-owned by former Hollywood couple "Brangelina," the winemaking is entrusted to the famille Perrin, one of the most important wine families of France's Rhône Valley. Over the past five decades, the estate vineyards have been bathed in the melodies of world-famous artists like Pink Floyd, AC/DC, The Cure, Sade, Wham!, Elton John, Sting, Sade and Muse, who have all recorded work at the studio first constructed here in the 1970’s 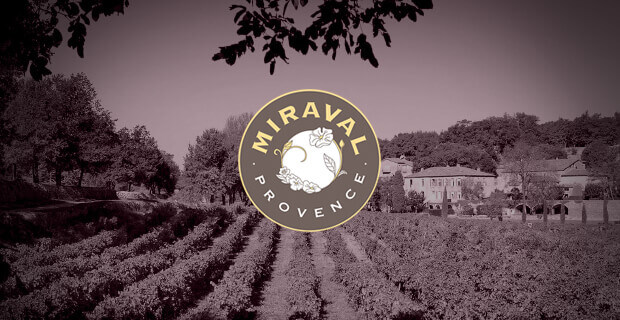 And, speaking of the vineyard, there is simply no place like it. Vines of Cinsault, Grenache, Rolle and Syrah stretch their roots deep into clay and limestone soils on terraces established at 350 meters high. These vineyards produce an irresistible rosé known for its elegance, its liveliness, its smooth vibrations.

The History of Miraval Wine

The Miraval estate is situated on an ancient site in Provence, near the Via Aurelia route, once crucial to the expansion of the Roman Empire during the 3rd century BC. Since then, this land has experienced centuries of history, serving as a centre for monastic practice, a residence for members of the French Royal Court and one of the Noble Houses registered in the 14th century. In 1970, a French jazz pianist named Jacques Loussier purchased the estate and in 1977 he constructed upon it a recording studio, which still stands today. Just two years after its construction, Pink Floyd chose the Miraval studio to record their legendary rock opera The Wall. Since then, many influential musicians have recorded work here, including AC/DC, The Cure, Sade, Wham!, Elton John, Muse, Sting, Sade and The Cranberries.

Up until the 1990’s, Miraval produced simple Vin de Pays wines. When an American by the name of Tom Bove purchased the estate in 1993, the viticultural technique and winery equipment were modernised, resulting in wines of higher quality. Bove also outfitted the estate with twin gyms, an indoor pool, a jacuzzi and spa.

In 2009, this Provence estate made headlines, when it was purchased by celebrity couple Brad Pitt and Angelina Jolie (nicknamed Brangelina). The chapel situated on the estate served as the setting for their wedding in 2014. Jolie and Pitt teamed up with Marc Perrin of the influential Perrin winemaking family of the Rhone Valley, best known for their Château de Beaucastel in Chateauneuf-du-Pape. The Perrin family co-owns Miraval with the couple, who have kept it despite their separation in 2016.  The Jolie-Pitt-Perrin partnership has resulted in major investments in both the vineyards and winery, the latter of which has been equipped with egg-shaped concrete tanks as a way of returning to traditional Provence rosé production. The team has also installed at the highest point of the estate a new press, which gently coaxes the juice out of the grapes and into fermentation tanks without the use of pumps.

From its first release in 2013, the new-and-improved Miraval rosé has experienced a level of success unparalleled in the world of Provence rosé. In the same year, Wine Spectator chose the Miraval Côtes de Provence Rosé as one of their top 100 wines of the world, making it the only rosé to achieve this distinction. With each new vintage, Miraval has confirmed its place as one of the world’s best rosé producers. Today, the estate also makes a less expensive rosé named “Studio by Miraval,” whose name evokes the property’s musical past and present. With the 2018 vintage, Miraval’s prestige cuvée was born. The aptly named “Muse de Miraval” is today the most expensive rosé in the world. In 2020, the Brad Pitt and the Perrin family took their collection a step further by partnering with the Peters family in Champagne to produce a prestige rosé champagne named Fleur de Miraval. The first edition, ER1, was released during the summer of 2020.

Miraval reigns over roughly 1,235 acres of land near the historic village of Correns in the heart of the Provence wine region of southern France. Here, Provence grape varieties like Cinsault, Grenache, Syrah, Rolle and Tibouren grow in clay and limestone soils organised into terraced vineyards, which are situated at an average altitude of 1,200 feet above sea level. The vines enjoy a textbook Mediterranean climate with mild winters and long, hot summers with plenty of sunshine ripening the grapes fully in time for the harvest.

Meanwhile, the Miraval estate is also home to its very own valley, which pulls cold air through from the Mediterranean Sea, resulting in the diurnal temperature variation necessary for the retention of bright acidity in the grapes. The sea breeze is also believed to lend a saline touch to the wines of Miraval. Finally, the Mistral wind that blows through Provence also has the effect of drying the air, leading to a lack of disease in the vineyards. These conditions favour the use of organic viticulture. In fact, the nearby Correns was the very first fully organic village in France.

Winemaking at this Provence Estate

Following a manual harvest in the morning, to lock in the freshness of the fruit, the grapes are sorted twice and then destemmed. For the Cotes-de-Provence rosé, the winemaking continues with a direct pressing of the Cinsault, Grenache and Rolle grapes, while the Syrah is vinified using the “saignee” (or “bleeding”) method. The vinification takes place in temperature-controlled stainless steel vats (95%), with a small portion (5%) of the fruit vinified in oak barrels with batonnage (stirring of the lees).

In the case of the Studio de Miraval rosé, produced under the IGP Mediterranee appellation, a part of the Grenache and Tibouren grapes is vinified in tulip-shaped concrete vats, whose shape results in a natural convection movement, which replaced batonnage. The Muse de Miraval cuvée is also vinified in the egg-shaped concrete tanks, as well as demi-muids. Overall, both the natural convection and batonnage result in the signature structure of Miraval rosés.

The Signature Style of Miraval Rosé

The rosé wines of Château Miraval offer a brilliant, masterfully executed expression of the Provence rosé style. In the glass, these wines present a beautiful, pale pink rose petal colour. The nose exudes the signature elegance of the estate, upon a bouquet of fresh fruit (redcurrants), fresh roses and lemon zest. Muse and Studio also express on the nose, delicate touches of white flowers, like linden tree flowers. The palate is just as refined, offering a lovely liveliness and gourmet red fruit notes, balanced with mineral notes and a saline touch. For a rosé, this wine lingers for a surprisingly long time on the palate, leaving behind juicy flavours of lemon on the finish.

While perhaps most alluring on a warm summer evening, Miraval is one of those rare rosés that satisfy all year round. We recommend serving it chilled to a temperature between 50 and 60 degrees Fahrenheit. Its elegant body, bright acidity and flavours of fresh fruit will allow this rosé wine to pair beautifully with a wide range of dishes, including grilled fish or sausages, roasted chicken seasoned with lemon and herbs, fried chicken or cheese. Nevertheless, this rosé also has everything to stand alone as the perfect choice for an aperitif or poolside lounge session.