Located in the southern part of Burgundy, at the North limit of Beaujolais area, Pouilly Fuissé is preched at the top of the Mâconnais wine region, in the heart of the great white wine...Read More

Located in the southern part of Burgundy, at the North limit of Beaujolais area, Pouilly Fuissé is preched at the top of the Mâconnais wine region, in the heart of the great white wine appellations (Fuissé, Pouilly Loché, Pouilly Vinzelles and Saint Véran). Pouilly Fuissé is produced exclusively with Chardonnay grapes. The production is small (700 hectares) and the vineyards cover the steep slopes of the village of Fuisé, Solutré, Pouilly, Vergisson and Chaintré, on which the soils are a mixture of clay and chalk from the Jurassic era. 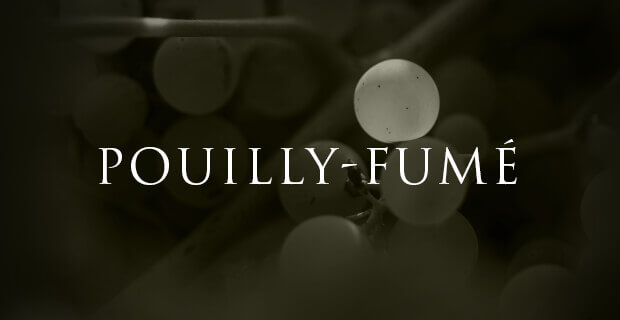 Known for its picturesque rolling hills and emblematic chalk soils, Pouilly-Fumé is a wine region specialising in Sauvignon Blanc on the right bank of the Loire River in France. Expanding over 1,200 hectares, the appellation is situated on a south-west facing slope and surrounds the charming villages of Saint-Andelain and Les Loges. Soils composed of Kimmeridgian marls and calcareous rock, with flecks of flint mixed in, allow the wines of Sauvignon Blanc to achieve an unrivalled complexity and an inimitable style, most recognisable by its gun-flint minerality. The fresh and vibrant fruit flavours range from citrus to tropical notes, which complement this grape variety’s “grassy” personality. Located just across the river from rival appellation Sancerre, Pouilly-Fumé has succeeded in earning a reputation for the exquisite expressiveness of its wines, the perfect white for those yearning for a classic and timeless Sauvignon Blanc.

Pouilly-Fumé is one of the most acclaimed wine regions of the Loire Valley in France, a dry white made with 100% Sauvignon Blanc grapes. This appellation, which is pronounced “POO-ee foo-MAY,” is often confused with Pouilly-Fuissé (POO-ee foo -SAY), located in the Maconnais region of Burgundy and specialising in Chardonnay. Pouilly-Fumé is situated on the far eastern flank of the Loire region, just across the river from rival appellation Sancerre. Unlike Sancerre, however, Pouilly-Fumé is fully dedicated to the production of white wine. The name of this appellation is made up of two parts: “Pouilly” is short for Pouilly-sur-Loire, the name of the village where the wines are produced. The word “Fumé” is short for “Blanc Fumé,” which is the local nickname for the Sauvignon Blanc grape variety.

Guides will tell you that the word “Fumé” in “Blanc Fumé” literally translates to “smoky” in French, in reference to three different elements of the region: the grape, the soil, and the fog. Sauvignon Blanc grapes are egg-shaped, growing in tight clusters. As they ripen, a thin smoke-coloured film (grey bloom) covers the fruit, which is why wine growers colloquially refer to this grape variety as a “smoked white.” This term also refers to the appellation’s easily-recognised gunflint aroma, which is believed to come from the flint scattered throughout the appellation. This signature aroma is such an important source of pride that one of the appellation’s best-known winemakers, Didier Dagueneau, has even named one of his wines “Silex,” synonymous with “flint.” Lastly, Fumé makes reference to the fog, which blankets the Loire Valley early each morning.

From the Benedictines to Phylloxera to Global Success

The vineyards of Pouilly-Fumé first appeared back in the 5th century, during the Gallo-Roman era. However, it wasn’t until the Benedictine monks began expanding the vineyards in the Middle Ages that the region achieved any commercial success. Since the monks had no family members or personal commitments to distract them, they devoted all of their free time to their vineyards. The proximity of the vineyards to the Loire River contributed to the prosperity of the area, as the wines could easily get to market, along the river. When the Briare Canal opened in 1642, the wine trade of Pouilly-Fumé expanded even further, since the canal linked up the Loire and Seine Rivers and provided a direct path to Paris, where an aristocratic and upper middle-classes clientele awaited aromatic whites to sip on.

Pouilly-Fumé continued to enjoy prosperity until the late 19th century, when hard times hit the area. In 1888, a dangerous mildew invaded the vineyards. Just when wine growers has finally figured out how to treat it, phylloxera showed up in 1890 and began feasting upon the roots and leaves of the region’s cherished vines. As phylloxera had devastated most of the vineyards, wine growers had no choice but to surrender to the pest. Over the course of the next decade, all of the vines had to be uprooted and replanted after being grafted onto American rootstock. Interestingly, Sauvignon Blanc dominates the Pouilly-Fumé appellation today because this grape variety was much more responsive to grafting than the red grape varieties (Gamay and Pinot Noir) that had been most widely planted here prior to the arrival of phylloxera. Pouilly-Fumé regained its former reputation soon after, when its production area was delimitated in 1929 and its AOC status confirmed in 1937. Through the 1970s and 1980s, Pouilly-Fumé became very popular, leading to a boom in the production of Sauvignon Blanc. Since then, Pouilly-Fumé has continued to ride this wave of success, despite rivalry with the neighbouring Sancerre appellation.

The vineyards of Pouilly-Fumé span across 8 communes in the vicinity of the town of Pouilly-sur-Loire, on the right bank of the Loire River. The appellation received AOC status in 1937, originally under the name “Blanc Fumé de Pouilly”. In comparison to the western part of this region, Pouilly-Fumé is characterised by more of a cool continental climate, as it is far from the Atlantic Ocean. The summers here are short and hot, while the winters are long and cold. The cooler conditions put the vineyards at risk of spring frost, while the Loire River helps mitigate the effects of extreme continental temperatures, allowing the vines to flourish. But what makes the wines of Pouilly-Fumé so distinct are the four different types of soil, which impart a variety of profiles to the wines. The soils of Villiers and Barrois limestone, locally known as “caillottes”, lend a beautifully fresh, sharp character to the wines that are typically ready to drink young. Marl soils with oyster shell deposits, known as “terres blanches”, produce crisp wines with fruity and floral notes, along with hints of smoke. These wines are known for their great ageing potential. The next soils type is flint, which provide tremendous spice and minerality to wines – especially the appellation’s emblematic gunflint aroma. These wines are best after aged at least one or two years, allowing them to fully develop their flavours. The last soil type found in Pouilly-Fumé is clay-flint, producing wines that vary in profile depending on the proportion of sand to clay. Wines with more sand tend to be soft and supple, while those with more clay are livelier in nature.

As in Sancerre, harvest usually starts at the end of September or the beginning of October. In the case of vineyards rooted on the steeper slopes of Pouilly-Fumé, the vineyards teams are faced with the strenuous task of manual harvest. In the flatter areas of the appellation, mechanical harvesting is more common, as it tends to save time and money. Once the grapes are picked at perfect ripeness, the winemakers seeks out the best potential expression of the variety for the vintage.

Two of the Pouilly-Fumé region’s most celebrated producers belong to the Mellot family, who represent not just this appellation but also many others in the Loire region. The first mention of vine growers and wine merchants in the Mellot family were in local records from 1513. Since then, the Alphonse Mellot estate has passed from one generations to the next, within the family. Alphonse Mellot and his son work as a team to create exquisite wines also in Sancerre, from Sauvignon Blanc and Pinot Noir. Domaine Joseph Mellot is another distinguished estate in the Mellot family. Joseph Mellot once ran the Alphonse Mellot estate with his brother Edmond, but decided to establish his own business in 1969. Catherine Corbeau Mellot now runs the estate, which serves as an ambassador for all eight of the Centre-Loire Valley appellations. Their cuvées of Pouilly-Fumé are characterised by a great finesse, elegance and complexity, enveloped in notes of fresh citrus and exotic fruit. The estate’s portfolio includes wines aged in stainless steel and those fermented and aged in oak barrels. But they have in common the signature crispy, biting acidity and aromatic persistence of Sauvignon Blanc.

Domaine Pascal Jolivet is another remarkable estate in Pouilly-Fumé, dating back to 1926, which is when the Jolivet family first entered the world of wine. Pascal Joliet manages the estate under his own name, with the help of talented Italian oenologist Valentina Buoso. For Joliet, the Sauvignon Blanc variety is all about freshness, balance and precision. He strives to amplify as much as possible the purity of the fruit and to provide an authentic expression of terroir with the use of exclusively indigenous yeasts. The result is a range of dazzling wines with a finesse borrowed from limestone, the richesse of limestone-clay, and the structure and minerality from flint soils. Last but not least, the Chateau de Tracy is another acclaimed representative of Pouilly-Fumé, offering some of the best expressions of the Sauvignon Blanc varietal. The vineyards of this estate have produced complex and diverse wines since 1396, but the estate was restored to its former glory in 1952 by Count and Countess Alain d’Estutt d’Assay. Today, Henry d’Assay heads the 33-hectare domaine. At the tasting, these rich, complex wines often reveal a variety of floral aromas, which may include broom, boxwood and lily-of-the-valley, along with a bouquet of sunny citrus and tropical fruit fragrances, underpinned by green pepper and spicy vanilla. Such luscious Sauvignon Blanc will pair beautifully to your favourite types of food.

With all of its dazzling fruit aromas and pleasantly nervy acidity, the wines of Pouilly-Fumé seduce wine lovers who enjoy classic and timeless Sauvignon Blanc. Before the last sip of one of these brilliantly textured white wines, you’ll find yourself already yearning for your next encounter with Pouilly-Fumé.