Even before the cultivation of vines was developed in Corsica, the practice of picking grapes in the wild was already deeply rooted in Corsican customs. Indeed, thanks to its sublime landscapes...Read More

Even before the cultivation of vines was developed in Corsica, the practice of picking grapes in the wild was already deeply rooted in Corsican customs. Indeed, thanks to its sublime landscapes between land and sea, Corsica has always been blessed with a flourishing nature.

With the arrival of the Phocaeans on the Mediterranean coast, vines were swiftly planted everywhere and they truly started to flourish on the Isle of Beauty during ancient times. Unfortunately, the infamous phylloxera epidemic decimated almost the entire Corsican vineyard, drastically reducing its surface area.

Corsican wines were then revived thanks to the dedicated and passionate winegrowers who set about restructuring the entire vineyard. Combining modern know-how and age-old traditions, they succeeded in lovingly working their vines to offer a wide range of wines that are highly regarded by the finest connoisseurs.

These exclusive vintages have experienced a real rise thanks to the exportation of the wines to northern Italy and their use during religious ceremonies. Today, they have successfully broadened their reputation beyond the country’s borders.

The 450 producers of Corsican vineyards are spread over four main geological regions. The soils in the west are predominantly granitic, while the east benefits from numerous types of schist. In the northwest, limestone is king. Lastly, on the eastern coast, there is a large quantity of clay or silico-clay soils.

On these exceptional terroirs, numerous indigenous grape varieties peacefully thrive and exude a plethora of aromatic expressions. Among the most famous, one cannot overlook the Nielluciu varietal, which is none other than the twin of the famous Italian Sangiovese variety. The Sciaccarellu grapes are essentially used for the elaboration of red wines, even if the latter is also used to produce rosé wines. In order to offer fresh and pure white wines, Vermentinu is meticulously cultivated.

To preserve the quality and reputation of these wines, an appellation system has been introduced. Out of the 7,000 hectares of vines that make up the Corsican vineyard, 2,500 hectares are AOC, of which there are nine. In the same way as the classification system in Languedoc and in the Rhone Valley, the appellations are hierarchical according to the quality of the wines produced. Thus, poised at the top are the AOC Patrimonio and Ajaccio, then the "village" appellation includes wines from Corsica Porto-Vecchio, Corsica Figari, Corsica Sartène, Corsica Calvi and Corsica Coteaux du Cap Corse. Lastly, a separate appellation, Muscat du Cap Corse, includes natural sweet wines.

All these rugged and unique features help to define the identity of fine Corsican wines, that reflect the exceptional vintages that are coddled by thousand-year-old lands.

Corsica: Wines from the Island of Beauty

“We had a Corsican wine that had great authority…It was a very Corsican wine and you could dilute it by half with water and still receive its message” wrote Ernest Hemingway in his ‘A Moveable Feast’. Corsica’s reputation for its superb wines continues to convey its message to the wine world that it is an island with beautiful terroirs, unique varieties and passionate winemakers, all of which have contributed to producing wines of ‘great authority.’ Let’s take a closer look into what exactly makes Corsicans wines truly unique in the world of wine. 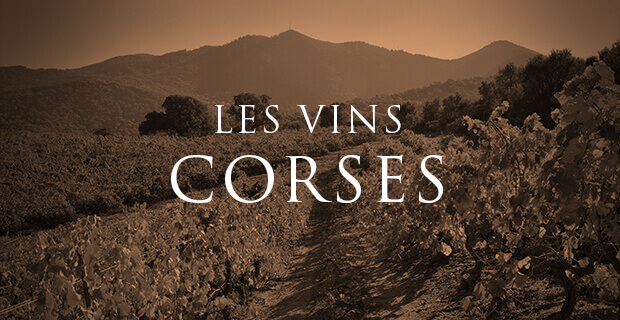 From Foreign Influencers to a True Corsica Identity

Corsica’s viticultural history had its beginnings in 570 BC when Phoceans traders first settled on the island. They were the first to establish the island’s vineyards in which they cultivated indigenous varieties and cuttings from abroad. The Italians then had their turn to influence the island’s winemaking traditions and varieties when it was under the rule of the Tuscan city of Pisa during the early Middle Ages, and then controlled by the Republic of Genoa in the 13th century. It was during this time that the Genoese enacted laws that controlled harvesting and winemaking practices throughout the island. Corsican wines, especially those from the Cap Corse region, were in high demand, which were difficult to obtain since the Genoese banned all exports of Corsican wines except through their port in Genoa. In 1768, the French gained control of the island, and it was now their turn to leave their mark on Corsica’s viticultural history. During the rule of Emperor Napoléon Bonaparte, who was born in the Corsican city of Ajaccio, Corsica was allowed to export its wines throughout the French Empire.


The 19th century saw efforts to improve the island’s economy though developing the wine industry. These efforts included planting the indigenous Sciacarellu variety across the island and building a large cellar located on the railroad line that connected the east coast to the capital city of Ajaccio. This progress was unfortunately dealt a lethal blow when phylloxera ravaged the vineyards in the late 19th century. It wasn’t until the end of French colonial rule in North Africa in the late 1950s that saw a revival of the vineyards. Exiles to Corsica began new plantings that were popular in southern France like Carignan, Cinsault, Grenache and Syrah. However, these vineyards were mostly high-yielding ones that had no connection to Corsican culture. From the 1980s, there has been a reduction of these plantings and a resurrection of indigenous varieties with a focus on small quantities of remarkable quality. The island’s producers have come together in the past 30 years to redefine the Corsican wine industry. They have turned to modern winemaking techniques and equipment like temperature-controlled fermentation tanks, and have rediscovered native varieties that were once considered lost to the ages. These efforts have improved the identity of Corsican varieties, and have given the island a reputation for superb wines.


Corsica is just a bit smaller than Cyprus, and it has a mosaic of elevations, climates and soils that contribute to its unique terroir. Due to the mountainous terrain, most vineyards are between 500 to 700 meters with Monte Cinto, the island’s highest peak, soaring 2,682 meters above sea level. The climate varies from maritime to continental with a large influence from its mountains. The warm temperatures and sufficient rainfall make Corsica ideal for grape growing: the mean average temperature in July is 24°C with an average annual rainfall around 730mm. Rain does fall in the harvest month of September, but most vintages have a dry, rot-free harvest since little rain falls in August and September. Interestingly, the maritime influence also has the added benefit of salty air. Some producers enhance this benefit through biodynamic treatments with dynamised ocean water to keep the vines healthy throughout the year.


As for the soils, they also offer up a melting pot as well. On the west side, granite mostly predominates while the north and east parts consist of schist. In the northwest and south parts of the island, the soils consist of limestone. Finally, winds also play a role in the terroir, and help the vineyard as long as they aren’t too strong. The Mistral from the northwest and the North African Sirocco help dry up the vineyards after the frequent and often unexpected rains. Not to forget the cold Greek Gregal and the hot Libeccio that also blow across the island.


All of these terroirs give Corsica nine

The backbone for many Corsican red wines come from either Niellucciu (pronounced knee-el-loo-cho) or Sciaccarellu (pronounced sha-ka-REL-loo), which are both indigenous to the island. Keep in mind that we’ll see these Corsican spellings of these varieties on their wine labels rather than the English ones, Nielluccio and Sciaccarello respectively. Niellucciu comes from the Corsican word for ‘black and dry’ and grows mostly in the north. It’s related to Tuscany’s renowned Sangiovese, so Niellucciu offers robustness and tannic qualities like its close cousin. We can expect red fruit and earthy aromas with floral, herbal and mineral notes. It covers about one-third of the island’s area under vines. Sciaccarellu grows in the south part of the island and has the reputation as a ‘Corsican Pinot Noir’ because of its elegance and complexity. Its higher acidity allows it to age well, and its soft red fruit and liquorice flavours offer savoury mouthfuls.


Although not an indigenous variety, the major white variety is Vermentinu (or ‘Vermentino’ in English or ‘Rolle’ in southern France). It was most likely the Phoceans that brought the variety to the island from Greece. The variety grows all over the island, and tastes quite differently to the mainland types. From these wines, you can expect a voluminous and mineral mouthfeel with floral and honey aromas. Both Sciaccarellu and Vermentinu each make up about 15% of Corsica’s vineyard area.


In addition to these three main varieties, lesser-known varieties are scattered throughout the island. Leading winemakers have made it a priority to recover indigenous Corsican varieties that many believed had gone extinct. One such variety is Biancu Gentile with its very fragrant aromatic profile and high sugar levels. Yves Leccia, winemaker at Clos Canarelli, rediscovered this variety and now makes a varietal wine from his very sparse plantings that give a soft citrus, complex white wine. Leccia has devoted tremendous amounts of time and resources to planting other vineyards with Corsican indigenous varieties. Another winemaker, Christian Imbert from Domaine de Torraccia, founded an association of Corsican winemakers in 1972 to work with these rare varieties. The association now works with 40 different varieties including Genovese, Codivarta, Carcaghjolu (both Biancu and Neru) and Riminese.


Some of the best Corsica has to offer


Domaine Comte Abbatucci: In the picturesque capital of Corsica, Ajaccio, we can see the name Abbatucci throughout the city on the names of streets, monuments and plazas. The name is from General Jean-Charles Abbatucci who was one of the heroes form the French Revolution, and fought alongside Napoléon Bonaparte. Jean-Charles Abbatucci, a direct descendant of the General runs the Domaine Comte Abbatucci. He has used biodynamic agricultural practices since 2000, and has championed the use of native varieties. His vineyard has 18 varieties planted on granite soils. Three of this estate’s exceptional wines include their reds, whites and rosés from old vines. The Faustine Vieilles Vignes Rouge is a blend of the island’s two main red varieties, Sciaccarellu and Niellucciu. The Faustine Vieilles Vignes Blanc is a 100 percent varietal wine from Vermentinu and the Faustine Vieilles Vignes Rosé blends the Sciaccarellu and Barbarossa varieties.


Yves Leccia: Yves Leccia has been making wines from some of Patrimonio’s best terroirs in the northern part of the island. His 15-hectare vineyard receives southwest exposure and sits on clay-limestone soils with shale, and benefits from a microclimate due to the maritime influence from the Gulf of St. Florent. The vineyard plot also includes the single terroir for his E Croce wines with its vines in thin chalk soils that rest on a thick schist bedrock. Leccia also uses biodynamic agricultural practices. There is no doubt that this exceptional terroir has contributed to his wines being referred to as the ‘Rolls Royces’ of Corscian wines, as well as his 30-year reputation for making elegant and complex wines. Two of his distinguished wines include his 100 percent varietal wines, the red Yves Leccia E Croce from Niellucciu and the white Yves Leccia E Croce from Vermentinu.


The dedication of these winemakers in their quest to express the beauty of Corsica’s terroirs and its unique varieties comes through in every glass of wine poured from their bottles. As these winemakers continue to maintain Corsica’s reputation for superb wines, we can anticipate even more rediscoveries from this island of beauty.