In a region where most properties hardly exceed 10 hectares, Troplong Mondot (founded in the 17th century) expands over 33 hectares, as one of the major estates of Saint-Emilion. Château...Read More

In a region where most properties hardly exceed 10 hectares, Troplong Mondot (founded in the 17th century) expands over 33 hectares, as one of the major estates of Saint-Emilion. Château Troplong Mondot, a First Classified Growth, is considered to be at the top of the Saint-Emilion appellation, with its blend comprising 90% Merlot, 5% Cabernet Franc and 5% Cabernet Sauvignon. Originating from a great clay-limestone soil, the wines of Troplong Mondot are known for their complex tannins that bloom over time with deep aromas of black truffle. Christine Valette-Pariente and her husband Xavier Pariente have managed the estate together since 1980 and have achieved excellence through these powerful and finely structured wines. The wines of the estate offer ample and complex tannins, along with truffle and blackberries on the nose. Following the takeover of Château Troplong Mondot by the SCOR group in 2017, Aymeric de Gironde, former General Manager of Cos D'Estournel, became president of the property’s board and set as his goal to make Troplong Mondot one of the of the greatest wines of the world.

Château Troplong Mondot | Wines with a Sense of Place

Perched atop the plateau of Bordeaux's prestigious Saint-Émilion appellation, Château Troplong Mondot is an estate classified Premier Grand Cru Classé with a rich story to tell. Home to a vineyard first planted in 1700 and a château dating back to 1754, this property has undergone numerous transformations, especially in the past few decades. 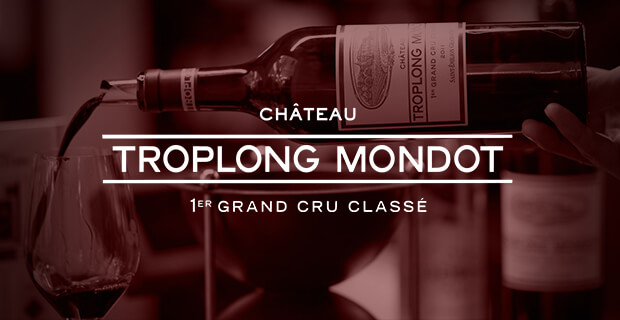 Today, the team is led by the passionate and proactive Aymeric de Gironde, who has set his focus on producing a more elegant, terroir-driven style of Saint-Émilion wine through viticulture that is more and more environmentally friendly and winemaking that favours a lighter touch. The result? A wine with a true sense of place, exuding ripe and syrupy black plums, blackberries and black cherries on the nose, enlivened by wild herbs and spices, along with nuances of wet earth and truffle. This is a wine with an opulent texture and extravagant beauty on the palate, the ideal choice for an intimate dinner with close family and friends.

The History of Château Troplong Mondot

The history of Château Troplong Mondot in Saint-Émilion dates back to the 17th century, when it belonged to the Abbe Raymond de Sèze. It was de Sèze, in the year 1745, who constructed the picturesque château that we see on the estate today. The property remained in the de Sèze family until 1850, when it was purchased by Raymond Troplong, a famous lawyer and President of the French Senate from 1852 to 1869. During his tenure at the head of the estate, Troplong expanded the property, through the purchase of new parcels, to the size it holds today. He also furthered the reputation of the estate’s wines by focusing on quality. Upon his death, the property passed to Edouard Troplong, who added the family name to the geographic qualifier “mondot” to form Troplong Mondot. For a few years, Château Troplong Mondot was owned by a Bordeaux negociant named Georges Thienpont, who sold it after purchasing Vieux Château Certain in the Pomerol appellation close by.

In 1936, the estate was purchased by the Valette family of wine merchants, who held on to it until 2017. In fact, it was Christine Valette, who took over running the estate in 1980, who brought about the most significant changes in both viticulture and winemaking. During her tenure, machine harvesting was strictly replaced with manual harvesting. Harvest date was delayed to allow time for the fruit to fully ripen, and yields were reduced in order to increase concentration. The remaining Malbec vines were pulled out and replaced with the flagship varieties of the appellation, Merlot and Cabernet.

In the winery, Valette introduced temperature controlled, stainless steel vats for parcel-by-parcel vinification and increased the proportion of new oak in the ageing program of the wines. The estate also released the first ever vintage of its second wine, named Mondot, in the year 1985. Valette also hired the famed Michel Rolland to consult at the estate in the 1970’s and 1980’s, a decision that led to a series of successful vintages. In 2006, Château Troplong Mondot was classified a Premier Grand Cru Classé B of Saint-Émilion.

In the year 2017, Château Troplong Mondot was sold to a French insurance company by the name of SOCR, who brought on Aymeric de Gironde (formerly of Châteaux Cos d’Estournel and Pichon Baron) as Director of the estate. Starting with the 2017 vintages, several changes were put in place at Troplong Mondot, including the constructions of new cellars and the purchase of adjoining vineyard plots from Clos Labarde and Château Bellisle Mondotte. The signature style of the estate’s wine was redefined. Today, the estate’s wines are much fresher, less concentrated and more terroir-driven, with less new oak used to age them. Inspired by the rich history and flawless terroir of the vineyards, Aymeric de Gironde plans to continue the estate's impressive improvements with the aim to produce one of the best wines in the world. Among the many stand-out qualities of the estate’s terroir, he cites the unique Molasses de l’Agenais soils as key to achieving this goal.

Château Troplong Mondot expands over 43 hectares (106 acres) of vineyard at the highest point of the Saint-Émilion appellation on the Right Bank of Bordeaux in France. Its position at an elevation of 110 metres, at the top of a plateau allows the vineyard to enjoy a healthy dose of sunlight and soils with good water drainage. The vineyards are situated on the gentle southwest facing slopes and sharp south-facing hills extending to Château Pavie.

The vines, aged 30 years on average, are planted in limestone and clay soils with fragments of chalk and flint, a unique terroir that serves as the foundation of the estate’s wines. The estate vineyard can be divided into 25 sub-terroirs, each with its own unique characteristics. Roughly 85% of the vineyard is planted with Merlot, the flagship grape of Right Bank Bordeaux, responsible for the powerful structure, body and flexibility of the wines. The vineyard is also home to 13% Cabernet Sauvignon, which helps the wines age longer, and 2% Cabernet Franc, which lends them a certain elegance.

The Château Troplong Mondot vineyard is managed with sustainable practices. The estate welcomes 12 horses to work its soils between March and November. Natural biodiversity is preserved with the maintenance of hedges and forests near the vineyards, which shelter local flora and fauna.

Winemaking and the Signature Style of Château Troplong Mondot

At Château Troplong Mondot the fruit is harvested manually and brought to the winery. Before the 2017 vintage, part of the vintage was vinified in 600L barrels. Since 2017, vinification has taken place in new, temperature-controlled stainless-steel vats with a truncated shape, with malolactic fermentation also taking place in the vat. The base wines constituting the blend for the Grand Vin of the estate are matured for a period of 16 to 24 months in French oak barrels, of which roughly 65% is new, although this proportion varies depending on the characteristics of each vintage. The barrels used tend to be untoasted to avoid masking the natural flavours of the fruit, the nuances of terroir and vintage expression.

The namesake First Wine of Château Troplong Mondot is a Saint-Émilion comprising Merlot, Cabernet Sauvignon and Cabernet Franc. The signature style of the estate has changed significantly since the 2017 vintage, with a lighter, purer, more terroir-driven style replacing the oakier, more extracted traditional wine. On the nose, this wine offers delectable aromas of ripe black plums, blackberries, black cherries and spices, as well as mocha, liquorice, dried herbs and earthy touches of truffle. On the palate, it is a full-bodied wine with a rich, opulent texture, but never excessively heavy. Depending on vintage, this wine can easily age over a decade in the bottle. Enjoy it with a mushroom risotto or pan-fried duck breast.

In an effort to reach out to visitors of Saint-Émilion and show them the unique art de vivre so characteristic of this region, the Troplong Mondot estate also established a wonderful restaurant, named Les Belles Perdrix, in 2012.

In just four years, the restaurant received its first Michelin star. Chef David Charrier welcomes guests with an inspired menu, highlighting the estate's wines and the bounty of the local terroir. Located just next to the cellar, the restaurant's cosy dining room is the perfect place in which to enjoy a meal expertly paired with Château Troplong Mondot wines, as is the sunny terrace overlooking the vines.