The history of the Perrier-Jouët Champagne House commenced following the encounter between passionate people. In 1810, Rose-Adélaïde Jouët, from a family of Norman merchants, married Pierre-Nicolas...Read More 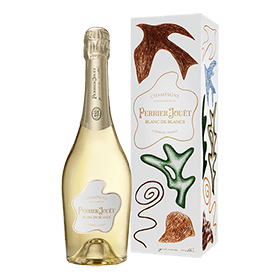 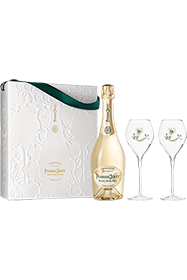 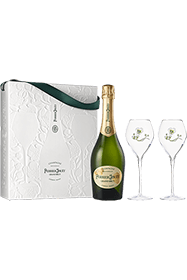 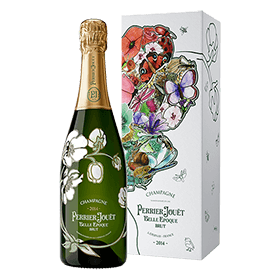 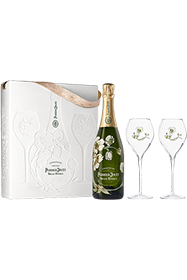 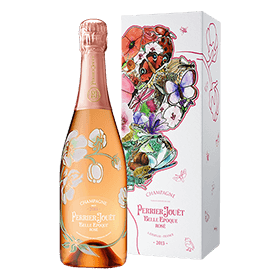 The history of the Perrier-Jouët Champagne House commenced following the encounter between passionate people. In 1810, Rose-Adélaïde Jouët, from a family of Norman merchants, married Pierre-Nicolas Perrier, a winemaker and botanist. A year after their marriage, these two art and nature lovers founded the Perrier-Jouët Champagne House with the ambition of producing different cuvées, revealing the nature of their terroir of origin and the fruit of their unconventional creativity for the time. From 1848 onwards, their son Charles continued to build the house's reputation. Following his death in 1878, his nephews, Henri and Octave Gallice, took over the running of Perrier-Jouët.

Perrier-Jouët watches over an exceptional vineyard that spreads over the great terroirs of Champagne: Aÿ, Mailly-Champagne, Avize and Cramant. At the beginning of the 20th century, Henri Gallice entrusted his friend and artist Emile Gallé with the task of designing a bottle in 1902 whose white anemones would become the timeless emblem of the brand.

The excellent quality of the raw materials used has always been of prime importance to the company, with particular attention paid to the terroirs of the Chardonnay grapes that contribute to the refined, subtle and floral Perrier-Jouët style. Recognised beyond the French borders for the quality of its cuvées, the Perrier-Jouët Champagne House became the official champagne of Queen Victoria from 1861 onwards and then that of the French Imperial Court.

In 1959, GH Mumm, a Champagne company, acquired Perrier-Jouët. In 1964, four magnums painted by Emile Gallé were discovered in the cellars of the estate. This discovery inspired the idea of creating a prestige cuvée. The marketing of the "Belle Epoque" cuvée in 1969, in the bottle designed by Émile Gallé almost 60 years earlier, marks a historic turning point for the brand.

Since October 2020, Séverine Frerson is the eighth Cellar Master and the first woman to enjoy this position. 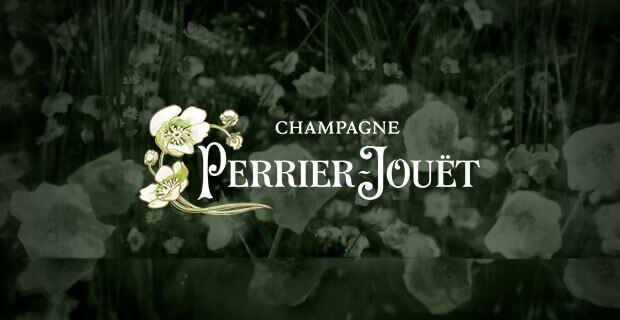 In the early years of the 1900’s, the Art Nouveau movement burst onto the scene, drawing inspiration from the  lines and forms organically occurring in nature, and breathing great beauty and poetry into everyday life. And as Art Nouveau visionary Emile Gallé added his final brushstrokes to the Japanese anemones on a certain magnum bottle of champagne, one thing became clear: the Perrier-Jouet Champagne House had found its muse in a movement that so fully captured and reflected its own values. A rare finesse, a floral elegance and a pure expression of terroir through Champagne’s best Chardonnay… Such is the timeless legacy of Perrier-Jouet.

Perrier-Jouet and the Beauty of an Epoch

Perrier-Jouet was founded in 1811 in the heart of Epernay by Epernay-based cork supplier Pierre-Nicolas-Marie Perrier, who combined his own name with the maiden name of his wife Adele Jouet to represent the house. The building on Avenue du Champagne, which today houses the company’s headquarters, was purchased by the couple just three years after that. While Adele kept a close eye on the management of the vineyard and winemaking, her husband focused on expanding the business into foreign markets. By 1815, Perrier-Jouet champagne was being sold in the UK and in 1837 two thousand bottles arrived in New York City. In fact, the estate became one of the earliest producers in Champagne to sell abroad and by 1847, around 90% of their sales went through export. In 1861, Perrier-Jouet was awarded the Royal Warrant from Queen Victoria of Britain, one of the estate’s earliest foreign enthusiasts. Their signature champagnes quickly developed a following in the royal courts of Leopold I of Belgium, Napoleon III, Catherine II Empress of Russia and the Swedish royal family.

On the heels of their financial success, the family increased its vineyard holdings in the Grand Cru areas of Ay, Avize, Mailly and Cremant. They decided early on to replace their vines with Chardonnay, a variety that was thought to bring a certain lightness to their cuvees. In 1854, the founders’ son Charles Perrier took over the company and changed the style of its signature product from sweet to "brut" or "grand brut", meaning a slightly drier style. He was among the first in Champagne to indicate vintage on the bottle. Perrier-Jouet pioneered the practice of not producing champagne in vintages whose harvests were deemed poor in quality. The estate was also one of the first to mark their corks in order to distinguish them from counterfeits.

As Charles had no children, the family business passed to his nephew Henri Gallice, often credited for the house’s close bond with the world of art. While Perrier-Jouet was established in 1811, its real identity was born in 1902, when Gallice commissioned the visionary Art Nouveau icon Emile Gallé to design a new bottle that would capture the spirit of the era. Gallé hand-painted onto four magnum bottles of Perrier-Jouet a bouquet of blossoming Japanese anemones. These handmade pieces, though beautiful, were deemed too expensive to mass produce, and they were stored in the cellars of the estate until 1964, when they were rediscovered. The house's Cellar Master Andre Baveret decided that this design, inspired by the movements of nature, perfectly illustrated the core identity of the Perrier-Jouet vintage champagne. The first Belle Epoque cuvee was released in the year 1969, bearing the beautiful and exotic floral design, which perfectly symbolizes the house’s signature floral expression.

The historic Champagne house was sold to Champagne Mumm in 1959, which was acquired by Pernod-Ricard in 2005. In the two centuries of Perrier-Jouet history, there have only been seven cellar masters, each one learning from those who came before them. Herve Deschamps became the house’s 7th cellar master in 1993, but only after 10 years spent learning from his predecessor.

Among the Vines of Perrier-Jouet

The quality of the grapes used in their signature cuvees is at the very core of the brand identity and house values of Perrier-Jouet. While the founder’s father Pierre Perrier already owned several vineyards in Dizy, Chouilly and Ay in 1756, his son and grandson would further expand the family’s landholdings by adding carefully selected plots in the most celebrated terroirs of Champagne. Today, the company owns 160 acres of vineyards, over half of which are located in the Grand Cru villages of Cramant and Avize on the Cote des Blanc, known as the home of Champagne’s highest quality Chardonnay. The estate’s own vineyards produce around one-third of the total grapes used in their production. They enjoy an impressive ranking of 99.2% on the quality scale of Grand Crus.

In the first half of the 20th century, the family acquired two legendary plots in Cramant, Bourons Leroy and Bourons du Midi. Here, Chardonnay vines stretch their roots deep in almost purely chalk soils, producing grapes with a pronounced minerality. It is from these rare grapes that the cuvee Belle Epoque Blanc de Blancs is produced, representing only 1% of the estate’s total production.

Perrier-Jouet currently produces a range of seven different cuvees, including their three vintage champagnes (Belle Epoque, Belle Epoque Rosé and Belle Epoque Blanc de Blancs), two demi-sec champagnes (Nuit Blanche and Nuit Blanche Rosé) and their full-bodied Blason Rosé, mostly from Pinot Noir. The entry-level Grand Brut is produced from a blend of reserve wines of 20% Chardonnay, 40% Pinot Noir and 40% Pinot Meunier. A fantastic introduction to this historical house, the Perrier Jouet Grand Brut exudes fragrances of white flowers, like honeysuckle and lime blossom, blended with fresh lemon and peach. While Chardonnay lends this cuvee its elegance and finesse, Pinot Noir contributed the essential fruit character. Pinot Meunier from Dizy in the Vallee de la Marne adds a gorgeous roundness to the mouthfeel of the champagne. Bottles of Perrier-Jouet mature at a constant temperature of 50 °F in the 6-mile-long corridors dug deep into the chalk soils under the Avenue de Champagne in Epernay. The estates non-vintage champagnes are aged for a minimum of 2.5 years, while the others rest 6 years in the bottle before commercial release.

The cuvees of Perrier-Jouet stand out from the rest in their signature style, which place great emphasis on the floral elegance of high-quality Chardonnay.

Perrier-Jouet and the Arts

The engraving of fresh white Japanese anemones on those four magnum bottles of Perrier-Jouet in 1902 marked the beginning of a cherished relationship between the Champagne house and Art Nouveau. Both the wine estate and the art movement have at their core a desire to infuse poetry and beauty into everyday life. Since their initial collaboration with Emile Gallé, Perrier-Jouet has continued to work with renowned artists, including Daniel Arsham, kloi DL, Makoto Azuma, Tord Boontje, Miguel Chevalier, Studio Glithero, Noé Duchaufour-Lawrance and Simon Heijdens.

In 1990, the estate also transformed the former residence of Pierre-Nicolas Perrier and Adele Jouet into a beautiful guest house named the Maison Belle Epoque. Home also to an impressive collection of over 200 Art Nouveau masterpieces, this venue offers guests a truly unique experience.