Louis Jadot | An Ever-Expanding Empire of Vines in Burgundy

Easily recognisable by the grinning god Bacchus gracing the pale yellow label of its wines, Maison Louis Jadot has for over a century been synonymous with excellence in Burgundy. Originally established as a maison de négoce with just a few plots to call its own, this family business has transformed over generations into one of Burgundy’s most formidable owner-producers through the strategic acquisition of carefully selected plots in top appellations. 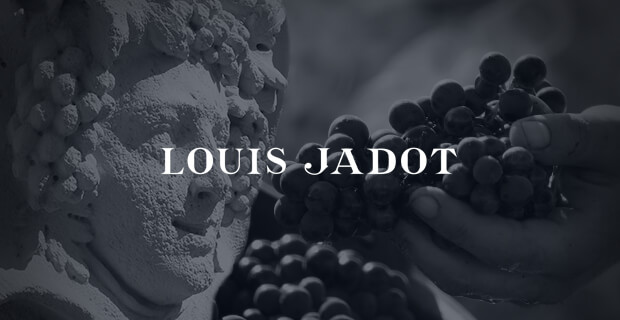 From the Jadot family's purchase of the Beaune Premier Cru Clos des Ursules in 1826, the Louis Jadot estate has grown into a massive empire of vines, encompassing 600 acres of vineyard from Chablis to Beaujolais. Rather than defining a signature style, Louis Jadot has long championed the idea of minimal involvement winemaking, allowing the wines to clearly express their unique terroirs of origin. The result is a dazzling portfolio of Burgundy and Beaujolais wines, available in red or white and from the Regional level to Grand Cru, with quality guaranteed across the board.

The History of Louis Jadot: Piecing Together a Burgundian Puzzle

The story of Louis Jadot is one of strategic acquisitions, the piecing together of a grand puzzle of carefully-selected vineyard plots. It begins with the Jadot family, originally from Belgium, who emigrated to the Beaune area of Burgundy, France in the 1790’s and acquired a share in the Grand Cru vineyard Chevalier-Montrachet Les Demoiselles. In 1826, the family holdings were expanded with the purchase of Clos des Ursules, a Premier Cru parcel just a few kilometres from the Chevalier-Montrachet vineyard. It was three decades later, in 1859, that Maison Louis Jadot was founded as an independent wine merchant by Louis Henry Denis Jadot.

Upon the death of Louis Jadot in 1900, the estate was passed down to his son Louis Jean Baptiste Jadot, who continued rapidly expanding the property by purchasing parcels in top Burgundy appellations, including the Corton Pougeot and Chevalier Montrachet Les Demoiselles plots. In 1945, Louis Auguste Jadot met Rudy Kop, founder of the Kobrand Corporation, and decided to export the wines of the estate to the USA and UK. Louis Baptiste Jadot was succeeded by his son Louis Auguste Jadot, who took over at the helm of the family business in 1939. Louis Auguste would reinforce the company’s international markets, while adding to the vineyard holdings parcels like Les Chouacheux and Les Bressandes.

A local man from a winemaking family in Burgundy, Andre Gagey joined Maison Louis Jadot as Deputy in 1954. As the Jadot family was left without a male heir to lead the company, he took over its management in 1962. Andre Gagey hired Jacques Lardiere, who would become the Technical Director of the estate in 1980. Together Gagey and Lardiere would expand the company’s vineyard holdings and improving the quality of its fruit. They also decided that to ensure the consistent quality of the wines, it was necessary to take control over the entire production process. Through the hard work and dedication of Andre Gagey and his son Pierre-Henry Gagey, who joined his father at the company at an early age, Maison Louis Jadot would transform from a negociant firm with some interest in producing wines from estate-owned vineyards to a leading owner-producer of Burgundy wine.

In 1985 Madame Jadot sold the Louis Jadot operations (excluding the family vineyards) to the Kopf family, owners of the company’s US importer Kobrand, which continues to market the wines today. Andre Gagey remained CEO of the company, investing the new capital into the significant expansion of Louis Jadot’s vineyard acreage. Gagey also secured long-term contracts with local winegrowers on non-estate-owned vineyards. Eventually, Andre Gagey was succeeded by his son Pierre-Henry as President of Louis Jadot.

Pierre-Henry Gagey continued the tradition of expansion at Louis Jadot which, by the mid-1990’s, boasted vineyard holdings of nearly 600 acres in the finest appellations of Burgundy. In 1997, Maison Louis Jadot ventured outside of Burgundy by purchasing the holdings of Château des Jacques in the Moulin-a-Vent appellation of Beaujolais.

The wines of Louis Jadot have been especially successful in the restaurant sector, frequently appearing on the wine lists of top Michelin star establishments. This can be attributed, in part, to the diversity of the range, which offers something for everyone, from the wine novice to the more experienced consumer and the professional sommelier.

The Louis Jadot Terroir : A Patchwork of Climats in Burgundy

Louis Jadot expands over a massive empire of vines, roughly 600 acres of vineyards scattered across the Burgundy and Beaujolais regions, from Chablis in the north to Moulin-à-Vent in the south. The vineyards are managed by a team of 70 or so people led by Pierre-Henry Gagey, relying on traditional practices, without the use of synthetic products (including fertilisers and herbicides) for the past 20 years. Either tractors or horses are used to carry out the work on the field, depending on the nature of each vineyard.

The various layers of soil are left intact, with most vineyard work focusing on the surface. Yields are strictly controlled through adaptive pruning and, in some cases, by allowing grasses to grow between vine rows and compete for resources with the vines. This results in the vine roots digging deeper into the soil, increasing access to nutrients and minerals, making for grapes that are more complex in flavour. An ever-growing acreage of vines are managed with biodynamic methods.

Winemaking at Louis Jadot : A Legacy of Excellence

Of course, with a portfolio as vast as that of Louis Jadot, it is impossible to speak of a specific winemaking style. Instead, winemaking techniques are adapted to the unique needs of each varietal, terroir and vintage. The harvest of the fruit is carried out exclusively by hand and followed by a careful transportation to the nearest Louis Jadot winery.

Pinot Noir is destemmed and added to oak or stainless steel for a long maceration. Alcoholic fermentation is, for the most part, carried out with the use of wild yeasts, followed by a slow malolactic fermentation in oak barrels. The wine matures for a period of 12 to 18 months - in stainless steel for the simpler Burgundies and some of the Village wines, and in oak for the Grand Crus, Premier Crus and the rest of the Village wines. The liquid is clarified naturally, but not fined before bottling. It is, however, sometimes lightly filtered to achieve the desired texture.

In the case of the Chardonnay, the must is often left in stainless steel for around 36 hours in order to allow it to settle. Alcoholic fermentation, for the most part, takes place slowly in oak, with wild yeasts, followed by either partial or total malolactic fermentation, depending on the vintage. The ageing process is usually long, in order to allow for the expression of a wider range of aromas. The wines are often lightly fined before bottling. The Pouilly-Fuisse Village from the Pouilly-Fuisse cru of Burgundy is a great example of a Louis Jadot white, expressing fresh and full aromas of lemon, grapefruit, hazelnuts and toasted almonds. An excellent pairing with creamy cheeses or roasted salmon.

The Gamay grapes used to make the Beaujolais wines of Louis Jadot undergo a rigorous selection. They are destemmed and left to ferment with wild yeasts, macerating for two to three weeks. This is followed by malolactic fermentation and maturation, half in oak barrels and half in stainless steel.

In 1996, Maison Louis Jadot established its very own cooperage, named Cadus, as a way to gain full control over the winemaking process. The oak is sourced from some of the best forests of France and dried for a minimum of 2 years before being shaped into Burgundy barrels of various sizes. It is in these barrels that the most prized wines of Louis Jadot rest, slowly developing into complex, elegant and intense expressions of Burgundy's top terroirs.